On Sunday 8 March, between sunshine and showers, FOGS members took time out of their regular monthly working party at Goostrey Station to celebrate two events. 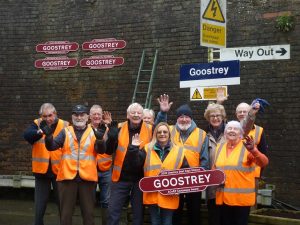 First, Bill MacDonald mounted the 2019 Campaigns Award from the Cheshire Best Kept Station competition on the wall of the road bridge beside the Manchester platform.

This Award recognises the negotiations over a number of years which resulted in the repair of the Victorian wooden building.  It’s now displayed alongside four Awards from previous years. 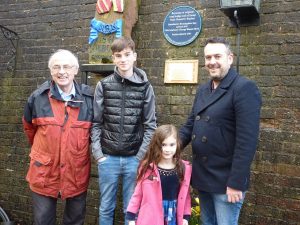 Later that morning a plaque in memory of the late Cyril Caulkin was unveiled by his son Andrew.  It was fitting that Cyril’s brother Keith, two of his grandchildren and several friends were able to be there as well. The plaque reads :

In memory of Cyril Caulkin, founder member of the Friends of Goostrey Station
whose vision initiated the restoration of the old ticket office.

Just before the unveiling, Cyril’s friend Peter Godfrey made a short speech on behalf of FOGS members.

‘As Parish councillors, Cyril and I started Friends of Goostrey Station in 2012.

From then until his untimely death, Cyril was the Chair.

But he was in fact much more than Chair; he was ‘Cyril ’, a larger than life figure, with an infectious smile and a twinkle in his eye, who made every FOGS volunteer feel appreciated and valued. During our Action Days at the station, he would move around from volunteer to volunteer having a chat and a laugh with everyone who had turned up.

After a few words from Cyril, the work seemed easier and the day seemed brighter!

Although some members said that Cyril only did it to get out of the heavy digging which took so much time in those early Action Days, they completely missed the point.  He was the glue that held the group together!’ 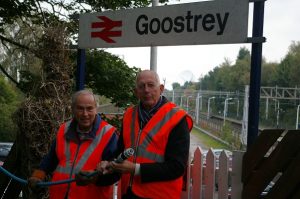 Peter (pictured with Cyril on the left above) added that:

‘Cyril would have loved to see this station building so beautifully restored.  And he would be delighted that we are still working to improve our station.’

New volunteers are always welcome at our working parties; they take place on the second Sunday from 10am.

As well as gardening and sweeping, FOGS members are involved in planning the future use of the station building, the installation of cycle racks in the car park and the improvement of passenger safety on the bridge.