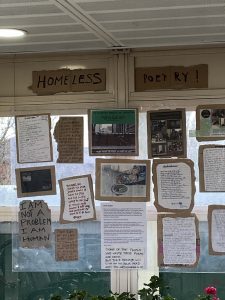 Handforth Railway Station is currently exhibiting a unique and rare collection of personally handwritten poetry from the homeless community living on the streets of Manchester.

Outreach worker Ged Austin (known as The Urban Poet) encouraged the rough sleepers to tell their own stories in poetry – he worked alongside them running small workshops in the doorways and colder places. These rare stories archive who the homeless are, how they got there, and how they feel about life.

Ged (shown above presenting the poems and pictures at the station)  has won their trust of these homeless people during the years, and has personally supported them with clothing, much needed provisions, and advice about support services they can access.

On display at Handforth Train Station is a selection of the nearly 100 poems he has collected, over the past 5 years, from the streets of Piccadilly and beyond Manchester’s town center.

Also on display are photographs of the life and hard times that these people endure on the streets of Manchester. The exhibition reveals the real poverty that can overwhelm people who slip through this country’s social net.

Ged said, “The aim of these poems and photos is to show the real human beings behind the arbitrarily-assigned labels of beggar, addict, prostitute. We want to break down stereotyping, showing, for example, how the homeless support each other on the lonely streets. Everyone needs to be aware this could happen to anyone if fate is unkind.

“Sadly, many people are still dying on the streets of Manchester and surrounding areas, but we must always work to help people out of poverty and back into society.” 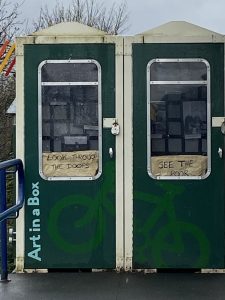 Hugh Everett, from the Friends of Handforth Station (FoHS) who commissioned this arts project, said  “Our projects at the station normally cover railway-based artwork. In this case, we are keen to promote the community aspects of our work, and do what we can to support the less-privileged members of our society.”

Click here to visit The Friends of Handforth Station