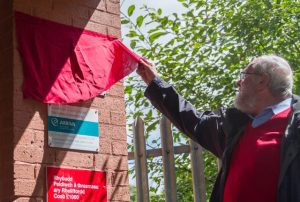 In a secretive project co-ordinated by NCRUG Volunteer and Publicity Officer, Ian Whitley, with the help of the NCRUG committee, Arriva Trains Wales and many other partners a plaque to recognise the incredible contribution made by long standing member John Hobbs was unveiled at Runcorn East railway station. 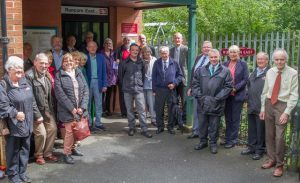 Colleagues, friends and family gathered at Runcorn East to witness the unveiling.

John was modest when Mark Warren, NCRUG chairman spoke about his service and achievements praising the team but we can all agree he deserves the recognition.

Runcorn East has benefited from his passion and determination and while his biggest challenge to tackle was the restoration of regular passenger services on the Halton Curve, the station seemed the most appropriate place for the plaque. 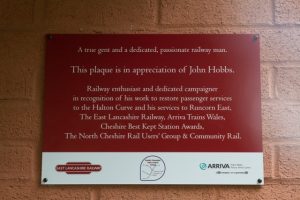 John’s railway work is extensive. He has campaigned with NCRUG for services over the Halton curve, coordinated the adoption and projects at Runcorn East, been a working member of Cheshire Best Kept Stations and has been an active volunteer on the East Lancashire Railway both on the footplate and at an organisational level.