This year, many youngsters from Handforth joined in the tributes, encouraged by their Scouting Association leaders, by making more poppy-based artwork to grace the station. 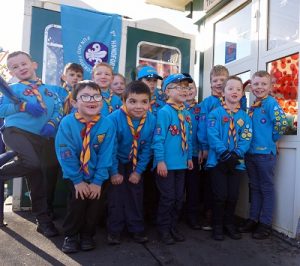 The Remembrance Parade went past Handforth Station on its way to and back from the Church Service on Sunday 10th November. Some of those who marched took time out to have their photographs taken in front of their work.

1st Handforth Beavers (aged 5 to 7) made displays with individually-painted poppies on it, which can now be viewed in the ticket office and in one half of the Friends of Handforth Station’s “Art In A Box” installation.

The Cubs (aged 8 to 10) created remembrance rocks and poppies out of upcycled plastic, which are attached to the fence on the Northbound platform. Scouts (aged 11 to 14) created an Avro Lancaster poppy display in the other half of “Art In A Box”.

Hugh Everett (Secretary, FoHS) said “We were delighted that the Beavers, Cubs and Scouts could help us with this important commemoration. We are very impressed by the efforts they’ve made, and it all helps make our station even more attractive and part of the community.”

The poppies displays will remain at the station for a short while. Friends of Handforth Station then plan to festoon the concourse and the ticket office with traditional Christmas decorations and lights towards the end of November.