The Friends of Goostrey Station write ….

Many people would not include the words biodiversity and railway in the same sentence.

But Network Rail states that they take seriously the responsibility to maintain and improve the railway, while being mindful of the variety of wildlife on the surrounding land.

Biodiversity means the variety of life – plants, animals, fungi, one-celled organisms, bacteria, viruses – and the habitats they live in.

The rural location of Goostrey Station means that there is a greater variety of plant species than at urban stations.

So there should also be a greater variety of life forms which depend on vegetation.

The rooks which regularly fly around and nest in the trees beside the Crewe platform are easily spotted.

But the identification of other animals needs more patience.

A recent surprise was that numerous woodlice and earwigs were sheltering between the wall and the memorial plaque to the first chair of FOGS, Cyril Caulkin!

Members of FOGS are keen to increase biodiversity around the station.

Plants such as Buddleia have been  added to the bank above the car park and, early in 2019, several bird and bat boxes were put up. 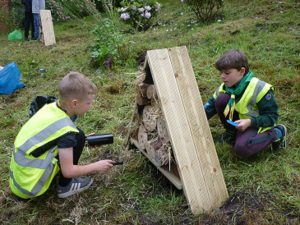 When Goostrey cubs held one of their weekly meetings at the station, they created three bug hotels to increase the habitats for invertebrates. 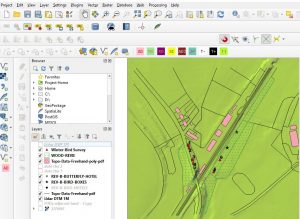 FOGS members have taken the biodiversity project a stage further by using a Geographical Information Service (GIS) to record species and their location.  It uses free Open Source Software to create maps.

Sets of data are stored so users can monitor biodiversity over time.

The information collected can be analysed to see which species of birds are currently using the nest boxes and what types of bugs are living in the bug hotels. This year there’s been an increase in butterfly numbers, possibly because of the planting of butterfly-friendly plant species.

In spring 2021, FOGS members plan to erect more bird boxes and the GIS will be updated by adding the new locations.

Every month, FOGS members create a GIS map which is uploaded into the Wildlife section of the website at friendsofgoostreystation.org.

When these ideas were explained during a recent online meeting, there was interest from other ‘station friends’.

FOGS members hope to encourage other groups countrywide to adopt similar practices in the grounds of their own railway.