The Friends of Goostrey Station send the following news … 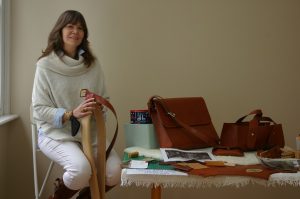 Debbie and Sian are in the building! 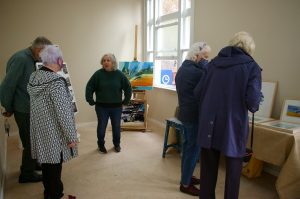 To explain – artist Debbie Goldsmith and leather worker Sian Tudor Jones now have the key to the restored station building at Goostrey Station.  Debbie and Sian have a vision : ‘We hope to build an exciting creative space where we can not only house our working studios but also hold workshops, exhibitions and educational activities.’  At present the contracts are being finalised and there are negotiations with Northern about matters such as electricity meters.

On 25th May, during the presentation to FoGS of a sixth award from the Cheshire Best Kept Stations (CBKS) competition, Debbie and Sian were able to allow members to enter for the first time since the refurbishment was completed in 2019.  The outside of the windows had been spring cleaned beforehand and inside, as well as paintings and leather goods, there was a display of photos showing the stages of the refurbishment. Everyone was impressed! 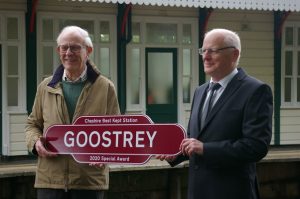 Mike Jarvis, former chair of FoGS, accepted the CBKS Special Award on behalf of the whole team.  Members had been asked to nominate the project that they were most proud of.  In his speech Mike said ‘Our main aim when FOGS was formed some 7 or 8 years ago was to persuade the railway companies to renovate our Victorian former ticket office, of which there are few examples left in the whole country. We also wanted it to be brought back into use in some form. We have achieved that goal and it’s fitting that we have with us today Debbie Goldsmith and Sian Tudor Jones who plan be the first occupants of the building for many years. Their aim is to form working Art and Leather Studios with Education Workshops for adults and children.’

Mike went on to explain that ‘This was made possible thanks to Network Rail and The Railway Heritage Trust (RHT) who together funded the £150K renovation project.  It is also highly appropriate that we have with us Mark Barker from CBKS who introduced us to Andy Savage at the RHT, and Rebecca Styles from Northern Rail with whom the letting contract has been arranged.’

During the FoGS working party on 13th June, the new totem was attached to the wall of the road bridge. At the same time, members admired the recently planted tubs of flowering plants and the new exhibition of art work in the platform shelter. Year 4 at Goostrey Community Primary School have a display inspired by Carol Ann Duffy’s book called The Lost Happy Endings.  The children have written poems and stories with twisted endings to traditional tales. The title of one is ‘Goldilocks and the Side Order of Potatoes’ – intriguing!  It’s well worth a look whether you’re a passenger or just out for a walk or cycle ride. Chair of FOGS, Dave Roberts emailed members after the working party saying ‘It was really good to see everyone’s enthusiasm with the various activities. The mounting of the recent CBKS award adjacent to the five previous awards really highlights FOGS achievements at the station.’