The latest improvement at Goostrey railway station is the installation of two display cabinets…. 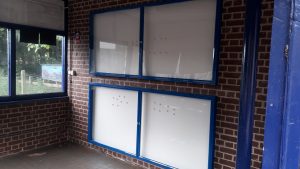 Nature Sign Design placed them in the waiting area on the Manchester to Crewe platform because this is where artwork created by pupils at Goostrey Community Primary School is exhibited. The cabinets are sealed and lockable so they will protect the exhibitions from vandalism and from adverse weather conditions.  Chair of FOGS, Dave Roberts was enthusiastic and said ‘They look really impressive’. 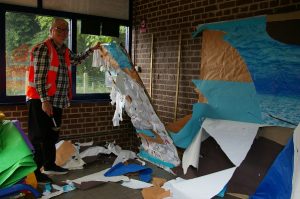 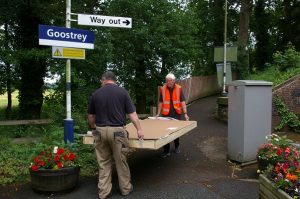 Funding for the purchase and installation of the cabinets has come from Sibelco, Community Rail and Northern Rail.  Currently Sibelco is excavating high quality sand in Goostrey. The company is always keen to play a positive role in the community and they provided a significant proportion of the cost. Community Rail regularly provides money for volunteer groups who are improving their local stations. Our Community Rail officer said that ‘the long standing relationship between FOGS and the local Primary School is outstanding’ and it has been ‘the basis of several awards, both regionally and nationally’.  Through their donation, Northern Rail is continuing their support for Goostrey station.  FOGS members plan to have small plaques near the cabinets which will acknowledge the generosity of all three donors.

For the last nine years there have been a series of displays of artwork at Goostrey station.  Soon after FOGS was formed in 2012, Cyril Caulkin suggested the project to deputy headteacher Becky Cowell and she has always been the driving force behind the exhibitions. FOGS members are delighted that the displays encourage residents, particularly parents, to visit the station.  And everyone celebrated when the creativity helped the primary school to achieve Artsmark Gold.

Themes for the displays have ranged from Going Places to the Queen’s 90th birthday.  In 2014, our annual Arts festival Goosfest included the display called Rainbows in an Art Trail.  Two years later, Jodrell Bank telescope featured in Star Gazing.  A nativity play called Holly from the Bongs by local author Alan Garner was celebrated in another exhibition. In 2017, when pupils and teachers from Elizabethfontein school in South Africa visited Goostrey, children from different backgrounds worked together to decorate a float for the Rose Day procession; and afterwards the creations were displayed at the station. One of the best displays in 2018 was inspired by Edward Lear’s poem The owl and the pussy cat. A few months later, a more serious creation called Remembrance commemorated the centenary of the end of World War 1.

Comments from passengers include :

–   Lovely to read whilst waiting for the train
–   Top marks for display and presentation
–   I wish our school did this
–   Really enjoyed the positive messages and the beautiful pictures! Well done students and staff!
–   Just what the community needs during such trying times. This cheered me up