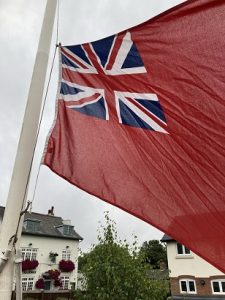 Merchant Navy Day is an official country-wide public day of remembrance, to recognise the sacrifices made by merchant seafarers in two world wars and since.

On the 3rd of September each year, community organisations are encouraged to fly the Red Ensign (the UK Merchant Navy’s official flag) to mark their observance of this remembrance. This year, 3rd September falls on Friday.

The Friends of Handforth Station (FoHS) have flown the Red Ensign on 3rd September for many years. In this year, their 25th anniversary year, the FoHS are keen to continue this tradition, and they have now raised the flag.

Hugh Everett, the Secretary of the FoHS, said “Although we are a long way from the sea, we recognise that the whole country should be very grateful for the courage and sacrifices made by civilian seafarers in the Merchant Navy during conflict and other times of danger.

“We are lucky, at Handforth station, to have flagpoles on which to display flags, and we are proud to be able to fly the Red Ensign this week to commemorate their dedication and bravery.”

Hugh added: “There was no wind at all when we raised the Red Ensign, but we hope that autumn breezes will start soon and show the flag in its full glory.”

FoHS plan to fly the flag alongside the FoHS Union Jack at Handforth train station for a few days before and after the 3rd of September 2021.