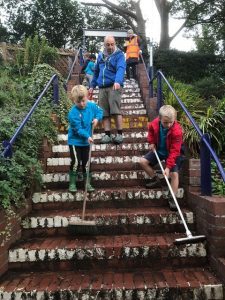 One evening in September, passengers at Goostrey railway station were surprised to see 30 Beavers in the car park ….

Some were helping to plant daffodil bulbs in tubs and learning how to use garden tools safely. 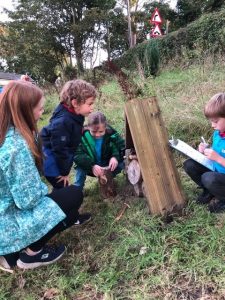 Some were investigating the bug hotels and others were sweeping fallen leaves from the steps. And some were inside the restored station building, making leaf prints with local artist Debbie Goldsmith.

Leader Sue Mottershead had arranged a meeting at the station so the Beavers could help with a local  community project.  It was also an opportunity for the children to complete challenges that would help them to gain awards. There were plenty of adults to supervise – four other Beaver leaders, three parent helpers and several members of FOGS.  We were lucky with the weather; despite heavy rain the day before and the day after the meeting, the actual evening was fine and dry. 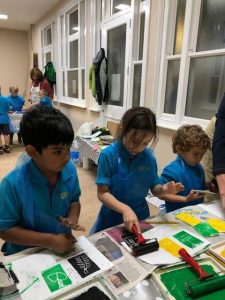 The enthusiasm of the children was infectious and so everyone enjoyed themselves. Debbie Goldsmith was particularly pleased. She explained ‘This is the very first community workshop in the new Visual Arts Studio on platform 1 at Goostrey station.  I’m delighted that the Beavers have all been so well behaved and happy’.

At the end of the evening, FOGS members Bill Macdonald and David Mason posed a question to all the children. ‘Our present Queen is called Elizabeth. But what was the name the Queen when Goostrey Station was opened?’ Many hands shot up and the name ‘Victoria’  was heard. 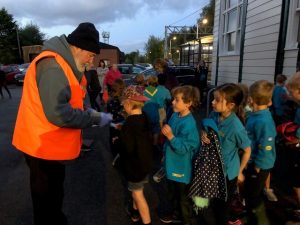 And then there was a surprise – Bill gave each child a genuine Victorian penny, well polished and in a small plastic case, as a keepsake