The Friends of Handforth Station had a successful Work Party at the station on Saturday 30th April.  They thank all those who attended and gave up to 2 hours of their time.

The Friends picked litter, cleaned signs and their Art in a Box lockers, swept the waiting shelters, tidied up some of the inside of the ticket office, and watered and maintained much of their planting.

Two major items you should spot on your next visit to the station: 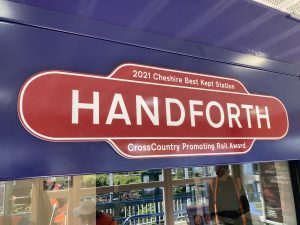 Inside the Ticket Office Handforth’s most recent Cheshire Best Kept Station Award (given to the Group for their work in Promoting Community Rail throughout 2021) has been mounted. 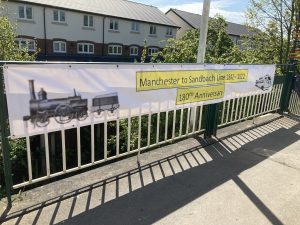 At the top of the Crewe-bound platform a banner advertising the 180th anniversary of the railway line from Manchester to Sandbach. 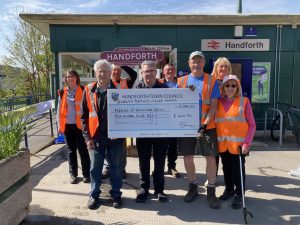 The Group were also very grateful to have received a donation from Handforth Town Council towards their Jubilee Celebrations.

On the last Saturday of May, the Friends will be running a special “Jubilee Work Party”. This will comprise primarily a drinks/food event to thank all the hard workers who have helped with Work Parties over the years.