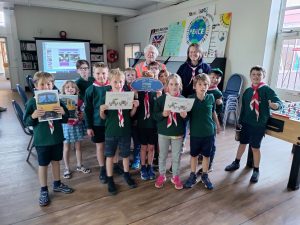 During May the Friends of Handforth Station (FoHS) created a display to commemorate the 180th anniversary of the Manchester to Sandbach railway line. This triggered a request from the 1st Wilmslow Cub Scouts to visit Handforth Station.

Accordingly, FoHS arranged for Northern Trains to provide the cubs with a complimentary return rail journey to Handforth. Accompanied by their leaders, the cubs boarded the 19.16 train from Wilmslow to Handforth.

On arrival at 19:19 the cubs were met by two members of FoHS who provided platform safety instructions before giving them a guided tour of Handforth station.

The cubs admired the station’s vintage running-in boards, planters made by the 1st Handforth Scouts, sculptures and totems in the Rotary Club Garden and the various posters and banners celebrating both the 180th anniversary of the railway line and the recent Platinum Jubilee.

FoHS then took the Cubs to Handforth Youth Centre, where they heard more details about the 180-year old railway line (see “Cubs Talk” on www.handforthstation.org.uk). The cubs asked some particularly searching questions during the presentation.

After being presented with a souvenir commemorative train headboard, some photographs and some certificates, the cubs caught the 20.25 train back to Wilmslow.

Georgina Dunn, Leader of 1st Wilmslow Cub Scout group said “Our cubs enjoyed learning about the history of the rail line in this 180th anniversary year. The station looks immaculate and is testament to the great work done by the Friends of Handforth Station for the benefit of the local community”.