The Friends of Reddish South Station publish their Summer Newsletter …

The Friends Group talk about the TFGM survey, the Platinum Jubilee Celebrations and much more. 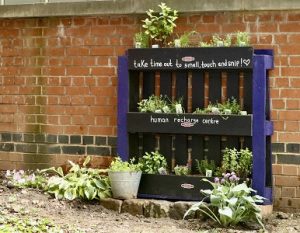 During lockdown the Group had purchased some  traditional wooden planters and some half barrel planters funded by grants and donations.

“Group members felt it was time to be bold and think outside the box to acquire more planters.  We decided to  tackle the challenge of up-cycling waste items in to planters and combine the activity  with Community Rail Week. We invited members of ‘Time Out Group’ a local group for  young adults with learning disabilities to ‘Give the Train a Try’ and travel  from Handforth Station  to help plant herbs in the new  planters , enjoy a picnic lunch and socialise with  our volunteers and guests from Northern Trains and the Community Rail Network.”

Northern Trains had recently announced that they were organising a ‘Grit Bin Challenge,  a fun competition for station adopters  to repurpose and up-cycle old yellow plastic grit bins no longer required for operational use. Northern’s maintenance contractor, ISS kindly released the bins from their corroded fixings and volunteers pressure cleaned the hard plastic bins and drilled drainage holes.

Thick ‘Night Blue’ paint was applied and volunteers transformed the waste items in to bright blue planters with drain holes and dressed them with stickers, signage and hand painted features using acrylic paints and pens.

The young adults planted up the recycled kitchen plate rack, filling it up with peat-free compost and a mix of herbs and perennial plants. Some enthusiastic watering followed and painted stones were  added to the planters depicting the names of the herbs and the groups involved in the project.

A picnic lunch was enjoyed by all before Martin Clarke from the Community Rail Network treated the happy gathering to some violin Ceilidh music. Time Out Group then took the train back to Handforth with warm smiles and requests to come back soon.

The pallet herb planter was added a few days later . This involved  a few design revisions but finally it was fixed to a wall behind the Manchester  platform and planted up.

Kelvin added:
“ What a fun time we had making the planters and engaging with the Time Out group. The next challenge is to keep the planters  all watered and stocked with plants all year round. We are seeking new volunteers to join us and help make the station a more welcoming place. Another key goal is convincing Network Rail and Northern Trains that a renovation and repaint of the station is long overdue.”

Barely has the dust settled on the 2021 Awards than we are planning the 2022 Awards!

I hope your summer planting and other projects to brighten up your stations are in full swing. Our team of judges are getting ready to be out and about and will be visiting stations between June and August to admire your handiwork.

In addition to our judges’ work, we are inviting your nominations for a further five categories of Awards as described below:

Community Engagement
How do you keep engaged with your members and the wider community? Has this changed since the lockdowns? Does promoting mental wellbeing amongst members and the community play a part in your activities? What are you doing now to expand your community engagement. Do you get involved or work with other groups, for example to celebrate anniversaries or the work of individuals, organisations, or events?

This nomination covers the period between 1st September 2021 and 31st August 2022 inclusive.

Art Projects
Tell us about an art project that you have delivered between 1st September 2021 and 31st August 2022.
How was the project chosen and what consultation within the community took place?
Who was involved in the delivery of the project and how was the project funded? What was the impact of the art-work and how has it improved the station? Art projects can include poetry displays.

Promoting Rail
How are you reminding your community about the station and encouraging people to travel by train? Also included in this category is projects and activities to promote walking and cycling to and from the station either for commuting or for leisure activities.

Sustainability
What are you doing to improve the sustainability of your station activities?
This covers the ability to resource your work, and the benefits to wildlife in and around the station. Possible features could include rainwater harvesting, composting, use of recycled materials, planting to encourage pollinators, choice of drought resistant and low maintenance plants, provision of bird boxes, bug hotels, research into wildlife etc.

This nomination is for activities between 1st September 2021 and 31st August 2022.

Entering your nomination
All nominations should consist of up to two sides of A4 plus up to six images or other documents which can be submitted as separate files.

Nominations should be submitted no later than 17.00 on Saturday 3rd September by email to nominations@bestkeptstations.org.uk

Please contact us if you have any queries. Enjoy your work. 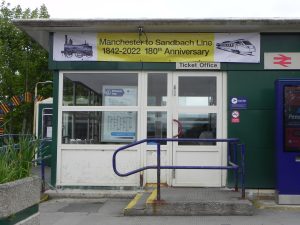 The Manchester to Birmingham Railway Company was founded in 1839. Its first public service between Manchester and Sandbach was reported on Saturday 14 May 1842, by the Manchester Courier and Lancashire General Advertiser, thus:

“The second portion of this line, twenty-one miles in length, from Stockport to Sandbach, was opened to the public on Tuesday (10th May 1842). The remaining distance to Crewe, four and a half miles, is expected to be opened early next month, as soon as the company can make arrangements for conveying the whole of the goods traffic along the line.

All the trains stop at the intermediate stations between Manchester and Sandbach, of which there are seven, exclusive of Stockport, viz., Rushford. Cheadle, Handford, Wilmslow, Alderley, Chelford, and Holmes Chapel. Chelford is the station for Macclesfield, and a coach runs thence to the town, a distance of seven miles from the station. The journey by railway and coach is nearly an hour shorter than by coach from Manchester.

The first train started from the station, London-road, on Tuesday morning, nominally half-past seven; but, from some little arrangements requisite to be completed, it wanted but 20 minutes of eight o’clock when the start was made. The train, consisting of one carriage of each the three classes, was drawn by the No. 9 engine, manufactured Messrs. Sharp, Roberts, and Co., of this town.

The train reached the Sandbach Station at six minutes before nine o’clock, being about an hour and a quarter for the 26¼ miles from Manchester, including some delays, and the stoppages at eight stations. “ 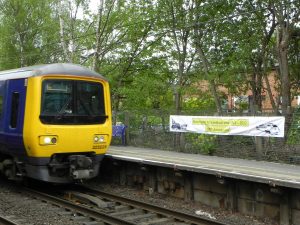 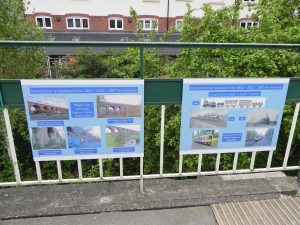 With financial assistance kindly provided by Handforth Town Council and the South Manchester Community Rail Partnership, the Friends of Handforth Station have celebrated the 180th anniversary of the Manchester to Sandbach line by means of a series of banners and posters displayed at the station.

Friends of Stations Groups further along the line (e.g. Wilmslow, Alderley Edge and Holmes Chapel) have celebrated the anniversary in a similar manner. 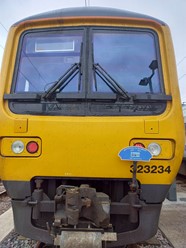 In addition to the banners and posters, FoHS members designed and built headboards for trains running on the Manchester to Sandbach line on the anniversary day. 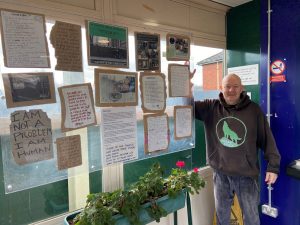 Ged Austin is an experienced guide who is inviting you to join him on a tour of “Handforth Past and Present”. This is one of a series of educational walks that Ged, known throughout Manchester as “The Urban Poet”, runs each year.

The Friends of Handforth Station (FoHS) have featured some of Ged’s poems at the station, and are now delighted to sponsor this community activity for locals. His “Urban Walks” are typically gentle strolls over a 5-mile distance with plenty of stops, and they can take 3 to 4 hours.

The Handforth walk that Ged is preparing for the FoHS will be from Styal train station to Handforth train station, and will be a “timeline walk” exploring the history of the area. It will feature Ged’s poems and some stories about the area, to which all are welcome to contribute.

Ged advises, “If you want to join us, to get your muscles and your memory flowing, then just turn up. Bring a snack pack (something you can munch on your feet), plenty of liquid, and wear sturdy footwear and clothing appropriate for what the weather provides.”

His “Handforth Past and Present“ walk will start from Styal train station at 10.30am sharp, on Monday the 23rd of May.