The Friends of Romiley Station report ….

The Friends of have been including details of walks from the station in their recent Newsletters.

These have been very well received so have now, with financial support from the Co-op Local Community Fund, been compiled into a 28 page booklet featuring 7 walks.

If you would like copies, please forward an address to which they can be posted, along with a note of how many you would like to to alfredvclark@btinternet.com 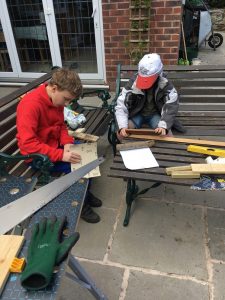 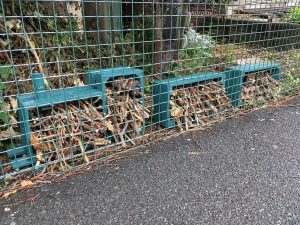 The Friends of Handforth Station are pleased to announce the arrival of the Bug Train on Platform 2 ….

This traditional steam locomotive with its two carriages is not going to any destination; it is instead built of wood and intended to be a home for all sorts of insects and other invertebrates for the next few years.

The Bug Train was built by young members of the FoHS (with help from their parents), and installed in early July. Three separate families produced the train, and its installation observed strict Social Distancing guidelines. 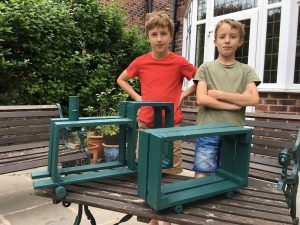 The Bug Train represents a non-specific steam “shunter” locomotive of the 1910s, with two open carriages.

Following the design principle of a Bug Hotel, it is stuffed with brushwood, twigs, leaves, some bamboo and a couple of old bricks. This material is designed to shelter creepy-crawlies during their autumn and winter hibernations; installing it in high summer gives it time to become part of the natural landscape and easily accessible.

Hugh Everett, Secretary of FoHS, commented:
“The Bug Train is part of two commitments of our group: to support nature and the environment, and to provide a welcoming and friendly environment for users of the station (human and non-human !). It complements our Hedgehog Hotel next door.” 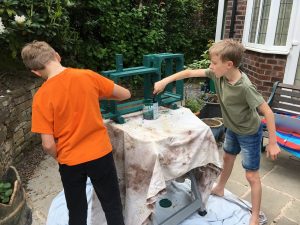 He added, “We’re proud that we managed to assemble it in three separate places in Handforth, under lockdown conditions, and then install it once we were allowed back onto the station platforms.”

The FoHS Bug Train has not yet formally been named. 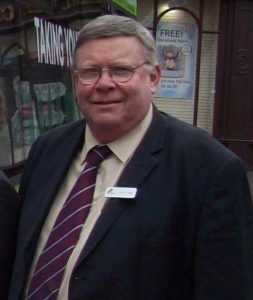 It is with great regret that Cheshire Best Kept Stations (CBKS) announces the passing of Chris Dale, our Secretary and a key member of the group.

Chris had a lifelong love of railways and public transport.

In later life he used his encyclopaedic knowledge to help passengers through his membership of the Rail Users Consultative Committee and leadership of East Cheshire Rail Users Group, TravelWatch NorthWest and the Crewe 2 Manchester Community Rail Partnership.

The rail industry saw him as a key stakeholder in representing  passengers’ point of view.

He was often in front of the TV cameras being interviewed on important rail issues for the North West.

He did much similar work for the bus industry.

Chris handled a lot of administrative work for CBKS and organised our judging procedure for five years.

We have lost a hard-working, genial friend and colleague, and a knowledgeable, but sometimes critical, supporter of the railways and the passengers and communities that they served.

The funeral was at Macclesfield Crematorium on Tuesday 7th July 2020.

Delamere Railway Station has probably more branches around it than most railway stations – after all it is in the heart of Delamere Forest !!

Unfortunately Covid-19 has suspended volunteer working at our stations in Cheshire but here is a glimpse of some of the work by the Petty Pool Trust – whose College and Outdoor Centre is just down the road from the station in Sandiway.

The Mid Cheshire Community Rail Partnership would like to thank all those from Petty Pool for making Delamere Railway Station a lovely place to visit.

This project was funded by the Northern Stations Fund through the Mid Cheshire Rail Users Association.

If you have photos and a story that would brighten our lives up as we traverse Covid-19, please contact the Cheshire Best Kept Station team .

Last autumn at Handforth Station, we planted 100s of bulbs.

They started to appear just as lockdown was announced, which means that very few people have been able to see the wonderful displays on the concourse, let alone on the platforms.

Special kudos given to FoHS’s Roger Small, who did the bulk of the planting.

So one of our group has taken a few photographs and made a presentation of the result.